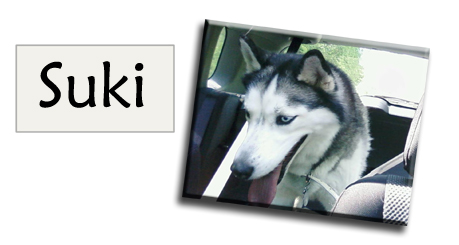 OS Suki was adopted by John and Carolyn in Maryland. They have a 3 soon-to-be 4 yr old Golden named Ben who has been lonely since their last two Sibes passed away in the last 6 mo. Suki and Ben hit it off from the first sniff and were playing within minutes. We got to see lots of pics of John and Carolyn's previous dogs, mainly Sibes and Sibe mixes. John Barron dabbles in photography and had some really great shots of their dogs. Carolyn also showed us a ton of pics of their "Grand Sibes", Grace and Kelly. This whole family is a bunch of dog lovers and especially Sibe lovers. The Grace and Kelly belong to their adult daughter. They go to daycare 3 days a week and all the Christmas cards were photo cards which of course included the dogs in the pictures. Their daughter had also called while we were there to check to see things were going. By the time we had wrapped everything up Suki and Ben were lounging on the living room floor next to each other just hanging out. Suki seemed to feel quite comfortable and at home and the humans and Ben seemed very happy in their choice for a new family member. I think it was a great choice and I think they will all be quite happy.